As I wake up and turn to grab my phone to engage in my daily “doom scroll”, I come across an Instagram Reel that grabs my attention. In the reel, D.C Young Fly, Karlous Miller, and Atlanta rapper J Money are discussing their disdain for the normalization of BBLs, breast augmentation, and the pressure that women feel to change or enhance their appearances in order to be desirable. “I want women to know that y’all are all beautiful in your own way”, proclaimed J Money after expressing his concern for women with the overly exaggerated hourglass figure. The trio went on to discuss the long-term consequences these procedures have on women’s health. Initially, I felt a sense of security in listening to three influential Black men encouraging women to accept themselves for who they are. However, the feeling was short-lived, as I began to realize that by occupation, these same men have profited from the perpetuation of these unrealistic beauty standards projected onto Black women in particular.

Have you ever reflected on the insurmountable number of films and videos you’ve seen where Black women who have natural bodies and hair, are nonthin and have dark skin are portrayed as the best friend, comic relief, or mother figure? Films where these women get the guy, achieve success, and live the life they’ve dreamed of only after they have physically transformed themselves to resemble the exotic beauty ideal of the male lead? Pause; Maybe you’re not a film person and you are into music. How many of your favorite artists have wives and girlfriends that look nothing like the vixens that are featured in their videos, or that they describe to be preferable in their songs and projects?

Popular culture, social media, and literature have historically made the standard of beauty very clear for Black women; to be beautiful, you mustn’t be a Black woman. For example, Sabrina Strings, author of the award-winning book, Fearing the Black Body: The Racial Origins of Fat Phobia, describes how the beauty standard regarding fatness in 17th-century Europe turned completely upside down as the bodies of African women were racially categorized as undesirable as a result of their blackness. Early modern European society once viewed fatness as a symbol of high social status and wealth, particularly for White women, but the varying body types of African women led to the onset of fatphobia itself. In other words, because Black women were fat, to be fat was no longer beautiful.

It is important to note that beauty standards and desirability politics are deeply rooted in anti-blackness. Patriarchy and its good sis, misogynoir, have strong roots within pop culture including but not exclusive to the ways in which Black women are socialized to view themselves through European beauty standards. The overwhelming use of intentionally undiversified images and harmful stereotypes perpetuated onto Black women through pop culture leads us to internalization and self-hatred. It is an epidemic. Black women are forced to live in a world where no matter our body type, facial features, the style of our hair, the way we dress, or simply the way we show up and hold space is deemed as being not good enough because of the indefinite intersections of our blackness and of our womanness. Despite varied definitions of beauty and the continued evolution of the beauty standard/ what is desirable, we find ourselves on the latter end. A harsh reality that we live in that only we can understand. 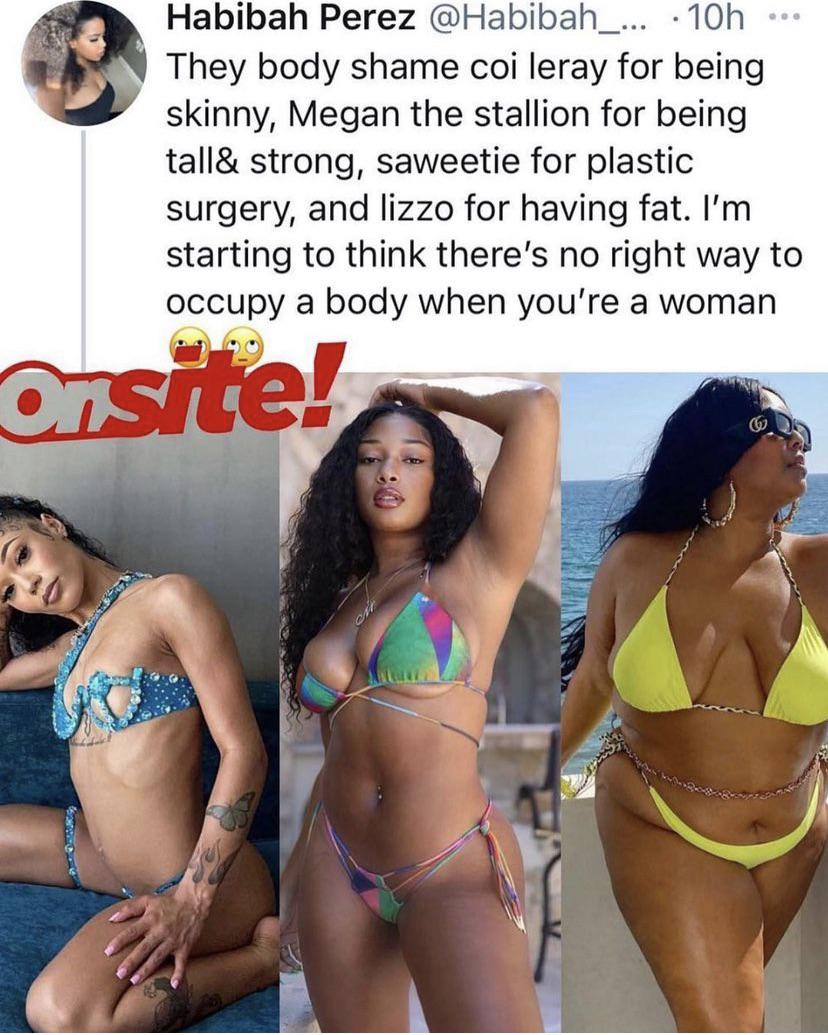 As Black women, there is no correct way to occupy our bodies within what the late, great bell hooks calls the imperialist white supremacist hetero- patriarchy, as it relies on our destruction for its survival. As a teenager in the late 2000s, I spent many a sleepless night longing to achieve the Kardashian/Jenner, “have Black features, but be white” aesthetic that was pouring out of mainstream media. Dear reader, let me stand and testify that no matter what extent I went to in attempt to white wash myself to fit in, nothing was ever enough. From a 60 pound weight loss, to breaking the bank on expensive clothes and accessories, to the many different hairstyles I cycled through, I was always going to be a Black girl. Peace and acceptance came only once I discovered within myself that being a Black girl is not a bad thing, as mainstream society would have me believe.

I am enough, because I am beautifully and wonderfully made; purposefully dripped out in this brown skin by my Creator. Fine by design. The journey to self- love and acceptance, which is the only way to save ourselves, is a continuous uphill battle. In a world where our very being is actively violated, the choice to choose you is one that must be made from moment to moment. I often reflect on the fact that our mothers and grandmothers have suffered in the same manner. This monster which we encounter every time we open Instagram, or turn on the TV, has only changed in appearance, but not in nature. Conversely, with massive advancements made through media, there has been a burst of diversity in representation that is different from what we have ever seen before. Trans women are more visible, fat women are more visible, disabled women are more visible, Black and Indigenous women of all shades are more visible, wearing natural hair is more visible much more. Where representation will not save us, it has the power to change the way we see ourselves.

Whilst we can not control the racist and mysogynistic world around us, we can control what we entertain and take in. From one Black girl in the struggle to another, allow me to elucidate. I suggest first and foremost normalizing taking frequent breaks from social media. Studies show that social media has extensive detrimental effects on women compared to men due to the amount of time women spend on social media, as well as the harmful images and environments we are exposed to. Moreover, it has been proven that Black women are targeted by ads encouraging skin lightening and plastic surgery, which have shown to increase feelings of social isolation. Secondly, practice mindfulness. Be as conscious of what you listen to and what you read as you are to the people you allow into your space as friends or romantic partners. As previously described, many of the big stars that we watch and listen to, overwhelmingly male, profit from promoting harmful and fallacious ideals about beauty aesthetics which they themselves do not even view as desirable or realistic. Lastly, and most importantly, love and forgive yourself, Black girl.

A passionate speaker, racial justice educator, and decolonial philosopher, Laurel Berryman is setting a new standard for institutions throughout the Northeastern U.S in abolishing systemic oppression. Her commitment to using education as a tool for reform, empowerment, and identity drives her professional and personal life.