As of this writing the recent return of Jean-Bertrand Aristide is eliciting excitement throughout the Haitian masses. The remaining short term question has been answered as to whether the Obama Sate Department would successfully arm twist the South Africans to hold Aristide until after the scheduled (s)election process or indefinitely if they promise aid (read as bribe) to the South Africa ruling elite. Now that the South African government has said no to keeping Aristide hostage, his return to Haiti is now a game changer. His re-entering Haiti’s public discourse with the power to lift the spirits of the Haiti masses and to move them forward in pressing their demands will again help to grow the popular organizations.

At the center of any movement in Haiti are the popular organizations that have twice survived the overthrows of Aristide and thousands of Lavalas elected officials, US/UN occupations, the banning of Lavalas and the imprisonment and murder of many activist and supporters. In addition they have survived the devastation of an earthquake that exposed more than anything else what the long term effects are of plundering by private interest, the willful negligence of cruel dictators and semi-elected stooges representing western neo-liberal economic interest does for building a nation – nothing! Haiti’s infrastructure was so week with no discernable building codes or standards that concrete structures snuffed out over a quarter of a million lives. Since then the government has been unable to muster the will and resources to rebuild literally anything.

Literally billions of dollars have been collected or pledged, but the vast majority of the monies have not reached the Haitian people. Instead the Haitian people have self-organized in dozens of camps to provide some protection against violence and rape, sought out resources for the hungry and created makeshift schools for the young. The popular organizations have worked to rebuild schools and colleges, women’s groups, micro-lending organizations, organizations dedicated to freeing Haitian political prisoners and aid sites that provide mental health and other material services and more.

These indigenous popular organizations have been challenged by the counter weight of the international NGO’s, most of which have become parasites on the Haitian body. They have bombarded Haiti and enriched various executive directors, financial directors, directors of programming, directors of outreach, directors of marketing, directors of profiteering, director of larceny, and so on at the expense of the Haitian people. These NGO’s primary unwritten mission is to use this “aid” to prevent a strong national government (particularly one infused with the ideas of Lavalas) from directing/having resources and implementing standards that may be for the national good in spite of elite opinion. NGO’s have been formed in Haiti much like one of the US governments’ strategies of the 1970’s to kill off the black power movement. By opening up resources to non-profits that can operate in various black communities, provide funding and jobs for various white do-gooders and offer services without the politics these NGO’s hope to de-politicize Haitians and make them grateful to charitable efforts. Can we say “poverty pimps” boys and girls? In both African communities (US and Haiti) this strategy is a way to stop the poor and working classes of black people from developing and implementing ideas toward economic justice and accountability and on preventing black controlled institutions with resources, in Haiti’s case a federal government.

However Aristides return allows for a clear and loved voice who can speak directly to the Haitian masses that make up the popular movements. A man who helped lead a nation from under a decades long dictatorship, has survived numerous assassination and coups d’état is not so easily defeated. He will again become a focal point for the Haitian masses to rally around. He will not have the immediate burden of having to be the President and put in a position to “balance” his principles of creating economic justice for the masses who brought him to power versus those bent on keeping the wealth in the hands of less than 1% of the population. The powerful and murderous white/mulatto economic elite, their black sycophants willing to kill for access to money and short term power and of course the so-called “international community”. This international community of western nations seeks to control Haitian politics and economics to prevent a self-determining Haiti from becoming a “good example” to other small nations. A nation that shuns the neo-liberal economic order and instead seeks out creative ways to run a national economy that brings more benefits to the larger population can’t be allowed to succeed especially if it is led by Africans who were once enslaved and freed themselves. Without holding elected office Aristide can be his true poetic militant voice. A voice that can be rallied around and challenge the eventual winner of the selection process between two U.S. backed right wing candidates’ former first lady Mirlande Manigat, and kompas music singer Michel ‘Sweet Micky’ Martelly, both who are in favor of re-establishing the reviled Haitian Army. Combined these two “front runners” received about 11% of the eligible vote in Haiti. While 72% boycotted the entire force, this is the free and fair election Obama and his State Department are bragging about.

The Haitian popular organizations will need all the help possible during this difficult transition process where the right-wing and there supporters are looking to cement its gains since the ouster of Aristide and the Lavalas party in 2004. Here in the United States the best support we can give in this important period is also as a clear militant voice that creates a solidarity movement that says Hands off Haiti. Bush, Clinton, Obama, Brazil, the Dominican Republic, France, Canada, and the United Nations you have done enough to keep the old Haitian order propped up and ready to kill. We have to be responsible for providing space internationally that will be needed for Aristide’s return and the continued mobilization of the popular movements. I remember once having a conversation with a fellow activist on why should we support Aristide, we should not deify him, he is not perfect. My response was neither was Patrice Lumumba from the Congo, but many of us who come to certain political beliefs hold Lumumba up as a sign post for leadership. I am sure that many would contend that if they lived during those times when Lumumba was captured by Mubutu, with the direct support of Belgium, the United States and the United Nations that they would have stood with Lumumba through all the lies of the western media and governments. Well now we all have that opportunity, to stand with a giant of African and world history. Aristides return to Haiti will come with great risk to his personal safety, but his voice will help in the mobilization of Haitian popular organizations during this difficult period. The popular organizations will bring services with politics that will continue to deepen the base and keep everyday Haitians in the struggle for a true democracy, (where Lavalas, the largest political party is free to participate) economic justice and the right to self-determination. 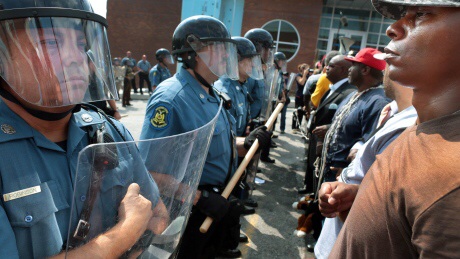